This is certainly random, but I was inspired to get this shot last year when I saw this angle on the cover page on the Facebook account of Steve Davison, Vice President, Parades and Spectaculars and the creative director behind such fantastic Disney shows as World of Color and Disney Dreams.  I was struck by the magical luminescence of the scene and the wide angle and the colors and sparkle, and I knew that I just had to see if I could replicate the shot.

Unfortunately, several times when I went last year, though the Small World facade was lit up, the hedge animals and surrounding shrubbery and trees were not.  It made for a less exciting scene.  Plus, with my old crop frame Nikon D300, I just couldn't quite get a wide enough shot--at least not in one take.  Enter this year's majority camera of choice, the D600, and my stopping by last week at an optimal lighting moment.  After trying several angles, I found this to be the most similar to my recollection of the inspirational cover photo.  One Raw photo editing session later, and voila!  I hope you like it. 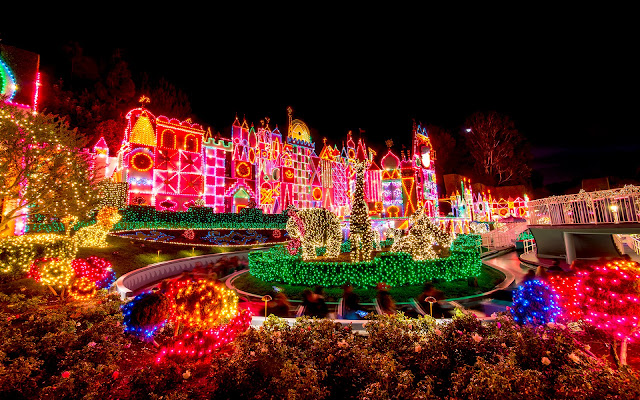