The Tower Behind the Christmas Tower

Last year, when the Tower of Terror was being transformed into the Collector's Fortress, many critics (myself included) bemoaned the eyesore that this would create from multiple angles of the park.  Not that the Hollywood Tower Hotel was necessarily the pinnacle of excellence when it came to influencing sightlines, but the Guardians makeover was just so garish!

Well, I don't think I was wrong.  The colorful facade vomit of the Guardians of the Galaxy - Mission: Breakout! show building is very noticeable, and during the holidays, it almost forms a laughable juxtaposition against pretty much everything else in the park.  One of my favorite comparisons is this telephoto view of the Carthay Circle Restaurant tower in front of the Guardian's tower.  The former is elegant and classic and has a simple Christmas wreath.  And then you have the latter, almost prowling up from behind in an intended ambush.

It looks ridiculous, but I guess that's what we have to deal with.  Won't keep me from continuing to call it out, though, from time to time! 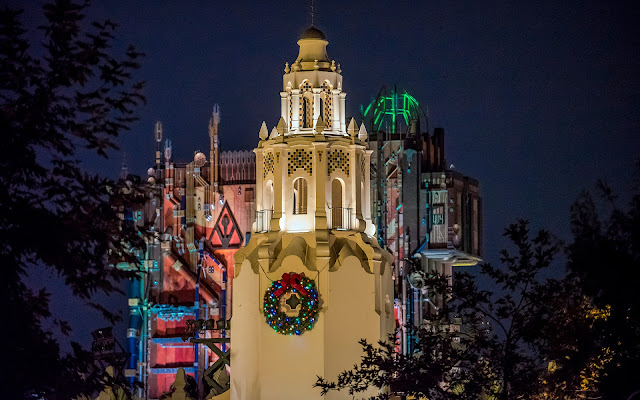 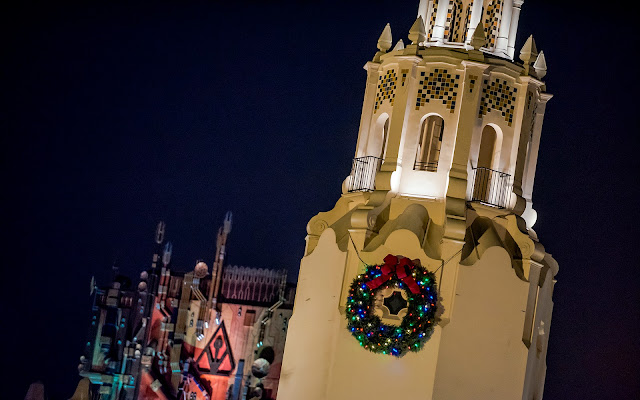