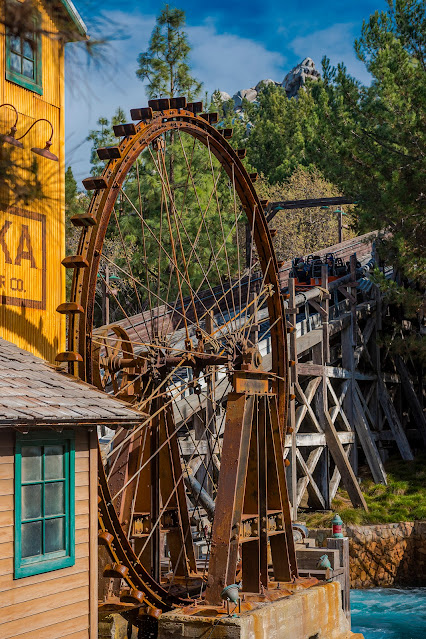 When you've photographed at the Disneyland Resort for as long as I have, you start to look for different and unique angles and views of the same scenes you shot dozens of times before.  Sometimes, that involves using a different lens or zooming in or changing view heights or any number of strategies.

In the photo to the right, a scene that I usually photograph with a wide angle is zoomed in to focus on the water wheel in front of the lift of Grizzly River Run, in Disney California Adventure.  This angle has actually changed quite a lot over the years, especially as the trees have grown in and obscured part of the view of Grizzly Peak itself.  Over time, the attraction has really grown into its lush, wilderness setting.  But this water wheel, a piece of frontier civilization, marks a nice contrast.  And its serene turning motion also gives a soothing effect to the soul and the ambiance.

The great thing with Disney is that the details are just as nice as the broad atmosphere.  There's beauty to be found everywhere in the parks, and at some point, we'll be able to enjoy that again.