Tokyo Disneyland, however, might have the most spectacular, and definitely the most photogenic.  The Tokyo Disneyland Electrical Parade Dreamlights is just that: a dream of illumination.  And when I say that it might be the most beautiful, I mean it.  Even though Paint the Night is newer, fancier, and has more advanced technology, there is something dazzling in the detail and richness of Dreamlights.  And though Paint the Night definitely has the better theme (Dreamlights reuses the regular Main Street Electrical Parade refrains, which isn't bad--I just love the Paint the Night theme that much), Dreamlights is longer, has more characters, features more complex float designs, and generally demonstrates why the Japanese are superior to us in every way. 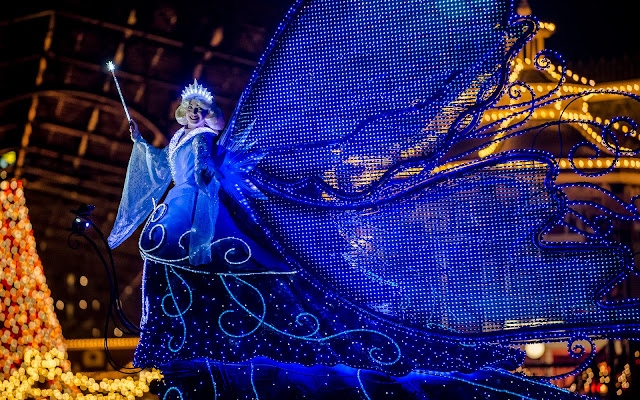 It's necessary, though.  The Japanese have a very high demand for shows--and high quality shows to boot.  There is a plethora of parades, stage shows, sideshows, and spectaculars at both parks, and they are all consistently packed.
So when I showed up in The Hub to watch both this and Once Upon a Time, I figured the best way to shoot it would be with my trusty Nikon 70-200mm f/2.8 telephoto lens.  And fortunately, I think the photos turned out rather well.  Take a look!