WARNING--STAR WARS: RISE OF THE RESISTANCE SPOILERS IN THIS POST!!

The crown jewel of Star Wars: Galaxy's Edge is not just an E-Ticket ride. It's an E-Ticket experience.  It's sort of two rides in one, with the boundaries between when the line ends and when the ride begins somewhat blurred.  After being briefed on the situation at the secret rebel base on Batuu, guests as new Resistance recruits are placed on a transport evacuating the system.  Unfortunately, the First Order shows up sooner than expected, which leads to capture and a march to the holding cell area.

It's at this point that guests are broken up into smaller groups for the purposes of distributing onto ride vehicles, but the whole scene is expertly played out like a cinematic moment, with First Order officers showing no care to their new prisoners.  Where groups diverge, a pair of Stormtroopers stand guard at a control booth, watching to make sure no Resistance recruits try anything suspicious.  In military rigidity, the guards stand almost perfectly still, occasionally turning their heads to survey the space.  Otherwise, it's a constant watch over an endless stream of guests who are sorted and sent to their interrogation rooms.

Is this part of the ride, or a theatrical execution of a ride queue?  It's hard to really classify.  Suffice to say, there's never been an attraction on an epic scale like Rise of the Resistance! 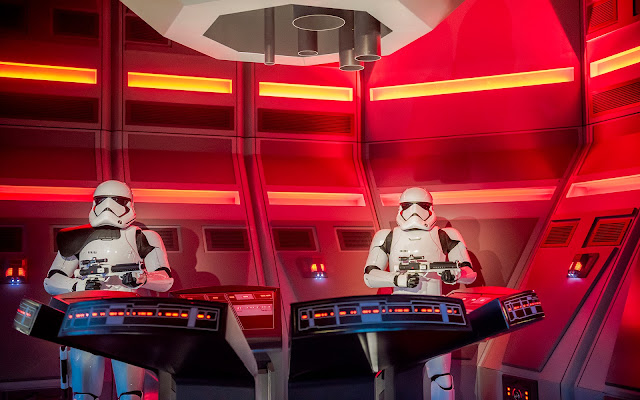 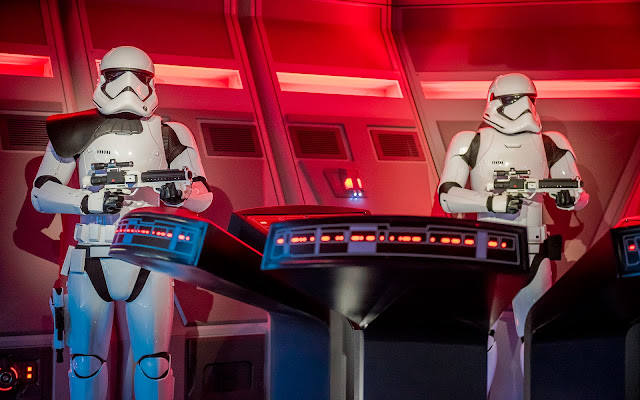