Today's post is another iteration of some photographic experimentation I started doing several months ago on certain shots that were taken under already-drab lighting, giving the scene a drab and dreary tone already.  My first play of a sinister-looking Splash Mountain, was certainly different from my usual bold, bright, vibrant, and detailed photography, but it definitely was evocative of a spooky and darker scene.  Another photo of the Mark Twain was less ominous, but it did impart an eerier twilight ambiance.

These two shots from the old FastPass booths at the side of the Haunted Mansion were taken after the sun had set but before the skies had fully gotten dark.  The grey hour lighting, lifeless as it was, proved to be a perfect time to capture the emerging glow of the lanterns and the waning natural illumination to give this green space a more intimidating and ghostly feel, as though the spirits were reclaiming what once was an area of verdant tranquility.  Making the shadows darker and the saturation less intense allowed me to weave a scene that looked much less Disney than normal, and although maybe this isn't what most would associate with Disneyland, I do like the different, somber look that emerged.  It's a perfect complement for the grimmer first half of the ride inside! 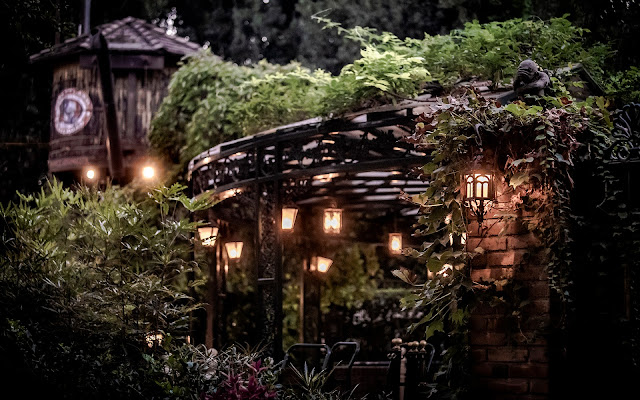