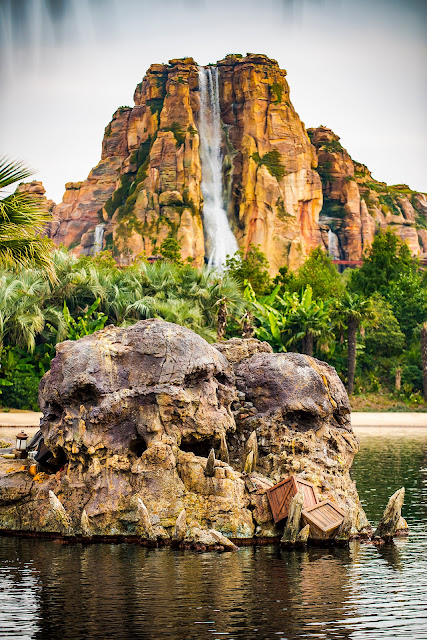 Splash Mountain, eat your heart out.  In Shanghai Disneyland, there is Roaring Mountain, a water ride featuring an iconic peak and a scenic waterfall--only the interior is filled with something a little scarier and less sing-song-y than Brer Rabbit and Brer Bear and Brer Fox.  Instead, it's a massive crocodilian--the Q'aráq.  And it lurks throughout the ride until revealing itself in frightening grandeur at the climax of the experience.

Outside the attraction, though, the vibe is decidedly calmer--though still intimidating and a little ominous.  Set across the lagoon, it looks monumental in the distance, and the use of forced perspective makes this landmark look even more towering.  And the way it interacts with the foreground of Treasure Cove brings a nice synergetic touch to the aesthetics of the two lands--emblematic of this new generation of Disney Magic Kingdoms.
Email Post
Labels: Adventure Isle SDL non-HDR Roaring Mountain Shanghai Disney Resort Shanghai Disneyland