A Harbor in Two Frames

Today's post is something different from anything I've posted before--the same photo (composed of four exposures) cropped in two drastically different ways.  The impetus stems from the nature of night photos at the Tokyo Disney Resort, which does not allow tripods into its parks at all.  This means that some creativity is needed for those nighttime long exposures, and photographers need to use whatever is available nearby to stabilize a photo.  Often, that includes setting the camera right on the ground, which can create some overly skewed perspectives as the angle faces upward and exaggerates the perspective of the view.

For this set, after I had merged the exposures together and masked in the proper highlights and shadows, I decided to also create a duplicate that manually corrected the perspective distortion, adjusting the vertical elements of the buildings to be as close to vertical as possible in the actual photo.  This was significant enough to change the whole aspect ratio of the photo from a rectangular wide screen to a square crop.  Which one do you think looks better? 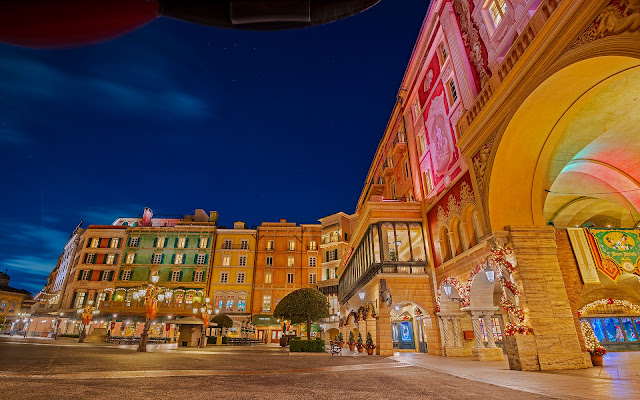