Last Friday marked the debut of Pixar Fest, a summer season overlay celebrating all things Pixar, and along with it came the relocation of the Paint the Night Electrical Parade from Disneyland Park to Disney California Adventure.  The parade itself remains the same beloved instant classic that premiered three years ago--minus the Frozen float that is too high for the overhead cables of Hollywood Land and Buena Vista Street.  An Incredibles float will take its place, but it wasn't ready on opening night of Pixar Fest.

Nevertheless, that didn't dampen the spirits of thousands of Disney fans excitedly camped along the DCA parade corridor, waiting for their beloved parade to return.  And once it did, there were many cheers and emotional gasps and applause.  Capping it off... Mickey Mouse, anchoring the end of the parade.  I had debated on where to wait before I went over but ended up settling on a fortunately-available spot at Carthay Circle, looking down Hollywood Blvd, similar to my old favorite spot of looking down Main Street from The Hub for the second show.  The Carthay Circle position would also allow me to get a shot of the floats as they passed in front of the Carthay Circle Restaurant, and one of my photo goals was to get Mickey Mouse passing by the iconic tower behind him.

Fortunately, on this Friday the 13th, the photo fortunes were with me, as Mickey looked right at the camera just as I had the frame I wanted.  It ended up being one of my favorite shots of the night! 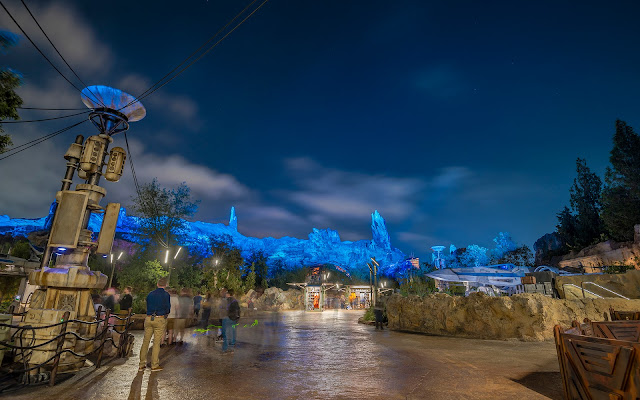