Continuing yesterday's look at "things at different Disney parks that are eerily similar to the original Disney park," we travel to Tokyo Disneyland to glimpse their Toontown area.  Effectively a clone of Mickey's Toontown in Anaheim, Tokyo's has a loosely mirrored layout with rearranged building orders and a much less worn appearance, with fresh paint and exquisite fenestration that makes it still look new, even though it opened way back in 1996, three years after the original Mickey's Toontown.

In Tokyo, Roger Rabbit's Cartoon Spin is located closer to the middle of the land.  So rather than hang out on the side almost like an annex, as it does in Anaheim, the E-Ticket of Tokyo's Toontown is more integrated into the more bustling downtown area, and its fountain feels more intimate to the neighborhood.  It's very similar in angle and element progression to Anaheim, but sharp eyed viewers will definitely notice differences in tone and intimacy.  And truthfully, these differences help make the sequel a better iteration.  The pristine condition maintained by the Japanese workers certainly don't hurt either! 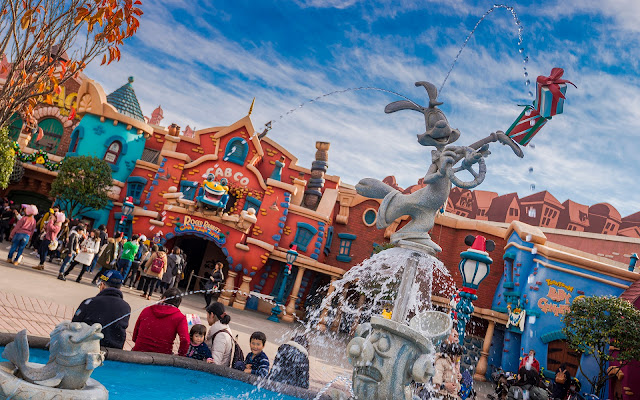