Walt Disney Studios in Paris is universally agreed as the most underwhelming Disney park, and though efforts are underway to make that better, there are parts of the park that have some amount of charm--even if it's just extremely locally.  Toon Studios is one example where there was an attempt at theming and visual storytelling.  Using Pixar as the basis of many of its attractions Toon Studios feels like a theme park, not a pseudo movie studio built on the cheap.

One of the attractions in the land might be awfully familiar to those of us who enjoy Disney California Adventure.  Cars Quatre Roues Rallye, or Cars Four Wheel Rally, is a turntable ride in the style of Mater's Junkyard Jamboree.  And rather than have an entire land themed to Cars, this attraction fits it all within the footprint of itself.  There's Flo's as the station, Willy's Butte as a theming element, and 50s style automobiles as the ride carriages.  It's not a lot, but it's better than certain other swaths of the park that lack any sort of charm.  That's a benefit, right? 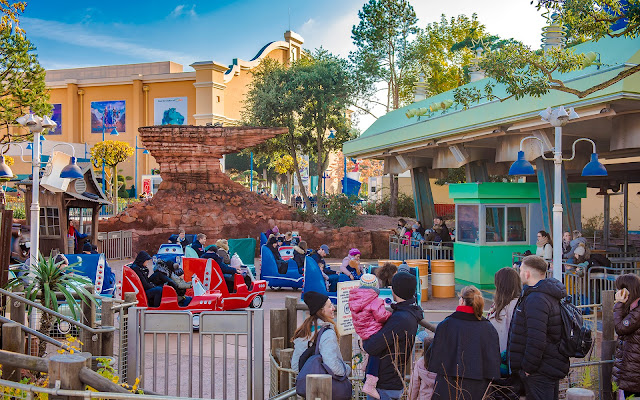