Ready for more scenes from the new Disneyland parade, Magic Happens?  Well, we're moving forward regardless, and today, we're looking at the fourth segment and last of the "recent hits" trio: Frozen 2!

Based off the smash hit that came out just late last year, this float focuses on the landscape and elements that serves as vivid and spectacular motifs for the film.  As with the other floats, dancers serve as the forefront, marking down clad in red leaves and off-white cloth.  They represent the Aspen tree trucks and the fall foliage of the Enchanted Forest outside of Arendale.  Swaying to and fro, they represent earth, as impacted by wind. 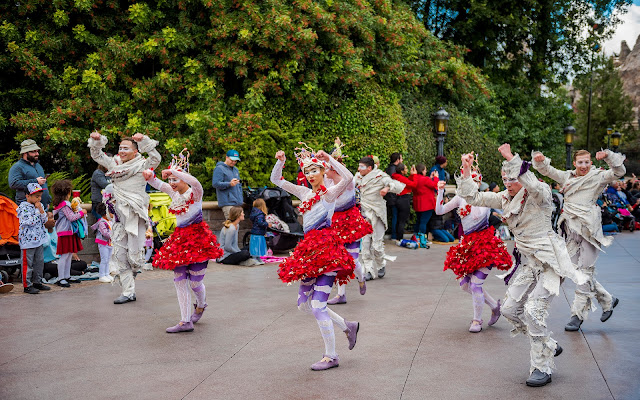 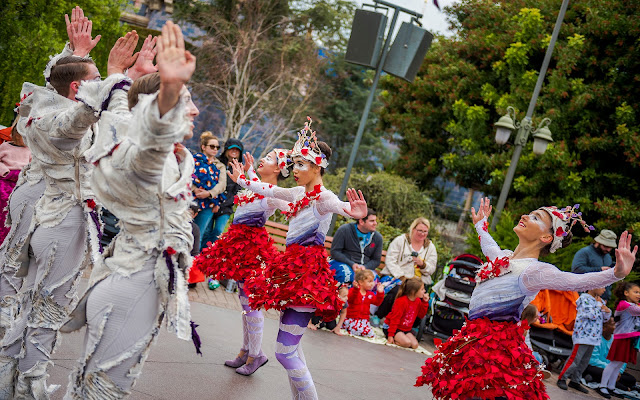 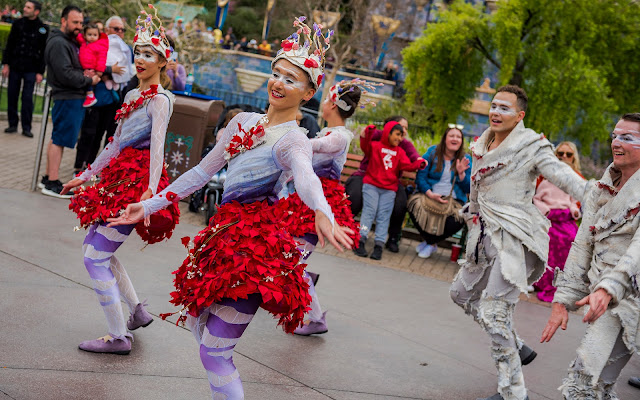 The float itself is a little surprising as far as Disney parade floats go.  Rather than focus and clearly showcase the main characters, the Frozen 2 unit actually obscures Anna and Elsa and Olaf, shielding them behind a line of trees that are fiery with autumn vibrance.  Normally, the main character(s) would be prominently featured, and the two preceding floats even do this.  But there's a play with sightlines and visual suspense here, and it isn't until almost the point of passing by that the float allows guests to see the two protagonists clearly.

Anna and Olaf ride an icy wave trailing from the frozen stallion galloping through the Enchanted Forest woods, while Elsa is perched on a frigid peak high above.  A giant and luminous snowflake reaches the float's high point behind her, with iconography representing the four elements.  The texture and detail of the float is pretty spectacular, even down to the berry-hued wildflowers forming a bed around the float's topography. 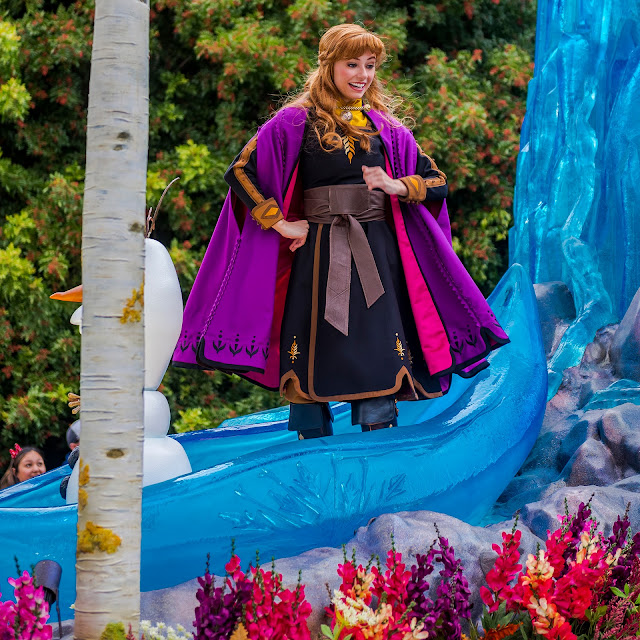 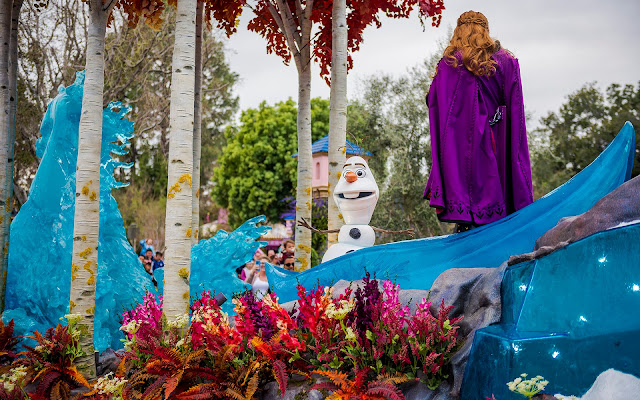 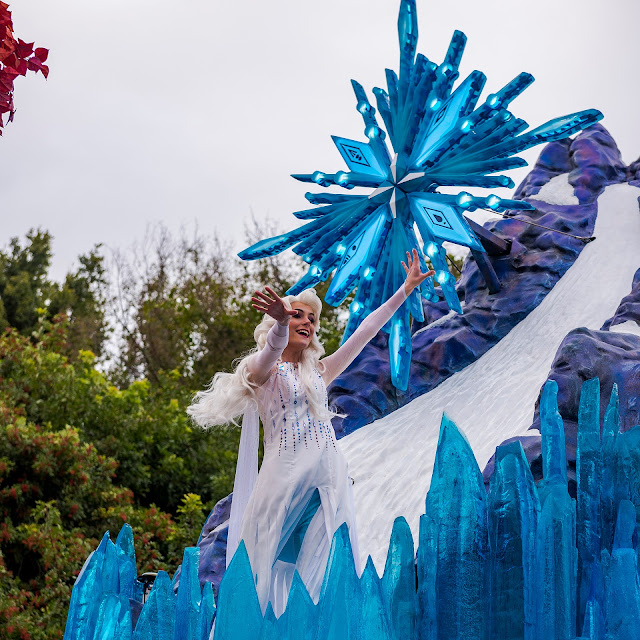 Trailing at the rear of the float is the lovable reindeer, Sven, cheerfully looking after Kristoff, who pushes an agriculture cart behind.  Kristoff has a goofy and innocent spirit, stopping to engage with the crowd and with his reindeer best friend, before taking out a lute to strum a few chords.  And then, as the float starts up again, he hurriedly gets back to his cart to continue the pace. 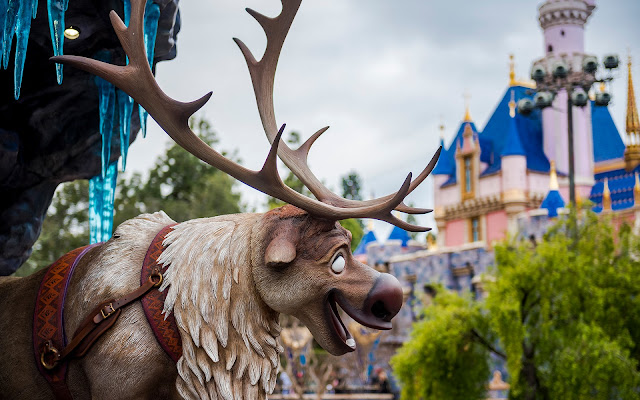 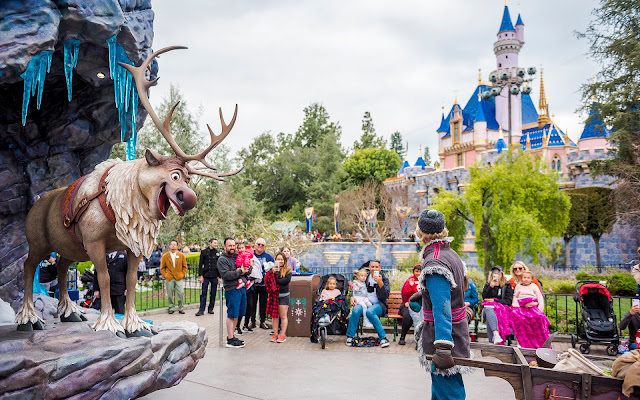 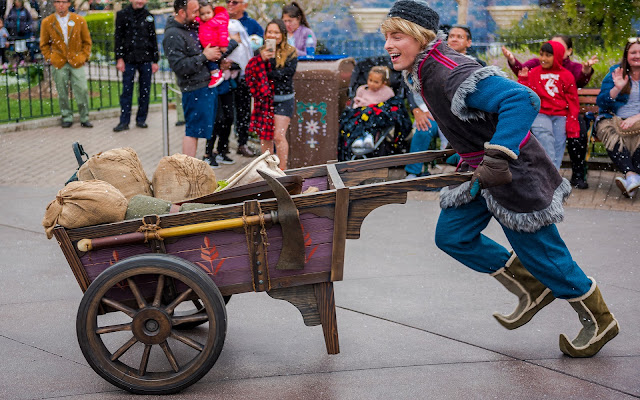 The Frozen 2 series isn't as long or complicated as its two preceding parts, but it does cap off the "new school" trio featured in Magic Happens.  It's back to the classics in the closing segment, which I'll tackle in the next post!
Email Post
Labels: Disneyland Disneyland Resort Fantasyland Magic Happens non-HDR parade