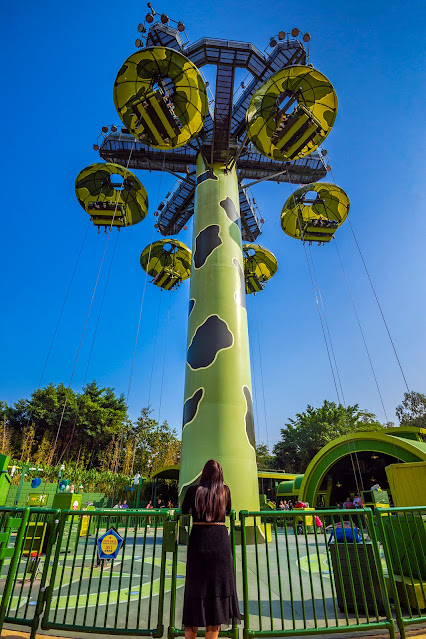 I won't lie... the Toy Story Lands of Hong Kong Disneyland (pictured here) and Walt Disney Studios in Paris aren't very interesting to me.  These hastily constructed, family-oriented areas don't quite have the magical Disney quality that most traditional Magic Kingdom themed lands contain, and though it's cute to see various oversized items as though we were shrunk down to the size of toys, similar to Disney California Adventure's A Bug's Land, there isn't really any enveloping ambiance that whisks one away to a fantastical locale.

They do, however, have something nostalgic by association.  The Toy Soldiers Parachute Drop is reminiscent of the class parachute drop rides of yesteryear, including one that used to be at Knott's Berry Farm.  Those are a little bit more adrenaline-filled than the Disney versions, which yield slower descents and sometimes shorter and jerkier plummets, but their vibe is similar.

And these taller versions of the Jumping Jellyfish attraction at DCA certainly feel a little more imposing.  One can't help but just gaze up and take in the sights!