The Parting of the Guards

This past Thursday night (technically Friday morning), I found myself in front of The Hub, having trying to squeeze every last bit of nighttime empty person photography I could to capture the beautiful holiday setting at Disneyland.  Unfortunately, that scene in front of The Hub looked like this: 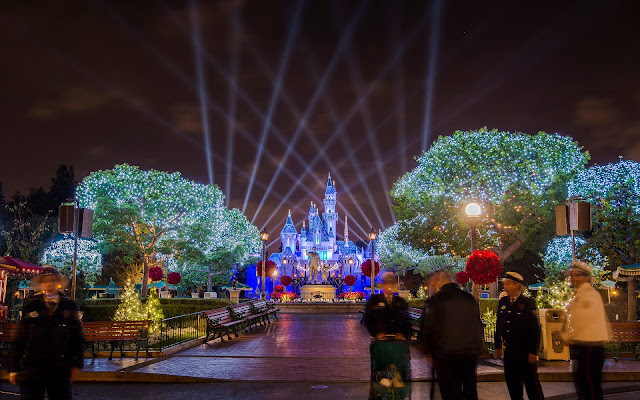 There I was, all set up, tripod perfectly centered, facing a lovely Christmas scene... and ALL the security guards were gathered in front of me.  Not just one or two, but all of them.  A dozen in total, half not even shown in the picture above.  I turned to my friend, Natalie, and asked her what were the odds I'd actually get the empty shot.  "Not a chance," she replied, already backpedaling toward Town Square, aware that the badges were certainly sending a message that it was time for us to leave.

But ever the optimist, I remained, waiting to see if they were going to flat out tell me that I had to go (at which I would have resignedly accepted it and kindly left), or to see if they might magically move out of the way on their own--enough for me to take a bracketed series of exposures to get a "perfect" HDR photo.

Things didn't look too good for the first minute, but the security guards seemed to be chatting with each other rather than tell me to overtly leave.  And then, just as I was starting to consider taking off, one of the white suits--who seemed to be the supervisor--called out, "Hey, get out of the way guys, so he can take his picture!"

It was a stroke of good fortune--a veritable Disneyland photographer's Christmas marvel.  Not only did I not have to ask the guards to leave myself (something I was reluctant to do when there was a huge group of them rather than just one or two), another guard had asked this on my behalf!!  I couldn't believe my luck, but I immediately set about with my three exposures, all at ISO 100, each 3 stops apart from each other, trusting that my Nikon D610's dynamic range, shooting in RAW, and post-processing would take care of all the gaps.  The security cast members all seemed to stare at me with a look of interest and perplexity, especially as I seemed to take a long time taking what most assumed would be one photo. Fortunate, the supervisor understood that I was shooting long exposures, and as it later turned out in a chat I had with him, he used to do photography himself, back when film cameras were still very prevalent.  So he got it, and he knew why I had waited.

Well, that patience was worth it.  I wound up with a beautiful and idyllic Disneyland holiday photo.  Indeed, it was a Disney Christmas miracle!